We are the Toyota specialist in Holmes Chapel.  Toyota is the fifth largest company in the world by revenue and the second largest automotive manufacturer. It is also the world’s first automotive manufacturer to produce more than 10 million vehicles per year which it has done since 2012. It is the market leader in sales of hybrid electric vehicles. It is the manufacturer of the Prius which is the most recognised name in hybrid cars. A Toyota manufacturing operation was established in the UK in 1989. This factory assembles vehicles and the first car rolled off the production line in 1992. The assembly plant and engine manufacturing factory employ around 3,800 staff.

This is one of the most popular vehicles in the UK and in Holmes Chapel, Toyota specialist teams can have your car serviced quickly and affordably. We are one of the leading independent garages and MOT testing centres in the area. Our range of garage services includes routine servicing, repairs, class III and IV MOT testing, electronic diagnostic testing, brake overhaul, tyres, exhausts, clutch replacement radio decoding to name but a few. We carry out work on all makes and models of vehicles both old and new. Our facilities boast two Class IV MOT bays and five Nominated MOT testers making it one of the busiest MOT centres in the area. There are also four service bays and a fully equipped body repair shop including a spray booth and alignment jig.

If you are looking for a Toyota Specialist in Holmes Chapel then come to us. We have been servicing and repairing vehicles for almost 25 years. Contact Macclesfield MOT & Service today to book your vehicle in for a service. Our business expanded to new premises in 1997 and we acquired Macclesfield MOT & Service Centre in 2000. We were then able to acquire Jepson’s Motors which specialises in providing a professional car body repair service. It provided a full range of body repair services from dents to full resprays to insurance companies. We feel we have a complete range of services to suit any vehicle repair or service. 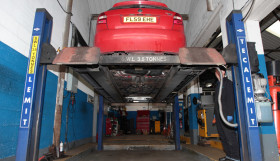 Despite the recent lockdown put in place by the government we would like to reassure all our customers that we are permitted to stay open and continue to offer MOT testing, repairs and servicing to your vehicle.

There is no MOT extension this time round so if your MOT expiry is due soon, then you will need to arrange for an MOT test to be carried out. We would be happy to arrange this for you.

As always we will be following all current government advice about social distancing, mask wearing and hygiene and ask that you do the following when you visit the garage. Please could you ensure your car is clean & tidy inside and any used PPE (masks, gloves, etc) have been removed and disposed off before dropping your car off with us. This is needed to help keep everyone safe.

Thank you for your understanding and we look forward to seeing you soon.